How Extruded Aluminum Saved the Canoe 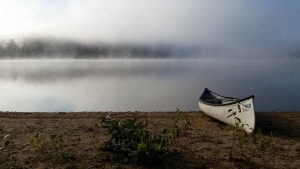 The canoe is one of the oldest seafaring vessels in human history, but did you know that its history is inextricably linked with that of the American aluminum industry? Without innovations in extruded aluminum shapes, we might not have the modern canoe we know and love today. It all started after World War II, when the U.S. had been producing record amounts of extruded aluminum for the war effort. After the need for automotive and aerospace parts began to lessen, manufacturers and extruders needed to come up with a new use for the material. Enter: the humble canoe.

Nowadays we think of aluminum as a common metal with many household and recreation applications, including but not limited to water sports. However, because aluminum is not a naturally occurring resource but an alloy made up of multiple elements, there was time before the 1940s when finding the right applications and demand for aluminum shapes was a tricky proposition. World War II changed the U.S. economy and workforce forever by employing millions of recession-stricken Americans for primarily manufacturing-based jobs to aid in the war effort. One such employer was called Grunman, a major supplier of aluminum aircraft for allied forces. After the war, Grunman needed to find a way to stay in business while providing extruded aluminum shapes for the public at large. One of Grunman’s employees, an avid outdoorsman, first came up with the idea of an aluminum canoe after struggling with his traditional canvas and wood constructed model. Aluminum, he proposed, would be significantly lighter, watertight, and easy to manufacture using Grunman’s advance techniques gleaned from extruding military aircraft parts. The gamble paid off, and the canoes quickly became Grunman’s most popular product.

Today aluminum is still one of the most commonly found materials for personal watercraft, and Taber is proud to contribute to this legacy of innovation, ingenuity, and American manufacturing. Visit our site here to learn about some of the other industries we serve besides marine; including automotive, aerospace, and agricultural markets. No matter how unique your idea, Taber’s team of metallurgists and engineers are ready to make it a reality. Get in touch today!