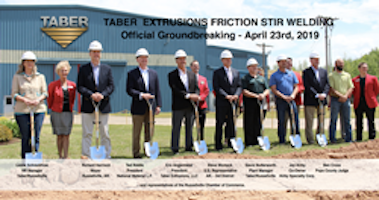 Taber Extrusions held a ground-breaking ceremony for the expansion of their Russellville Friction Stir Welding facility which included State Representative Steve Womack amongst many other state and local leaders.

Taber Extrusions held a ground-breaking on April 23rd, 2019 for a 60,000 square foot expansion of their Russellville facility. There will be a considerable capital investment and approximately 20 jobs will be created. The expansion will house a state-of-the-art friction stir welding operation.

This new technology has applications for military, bridge building, railroad refrigerated containers, and more – and brings with it the technology to develop new products. Taber currently employs 142 associates in Russellville at their aluminum extrusion and fabrication company, and is owned by National Material, L.P. Taber has operated at the Russellville facility since 1976.

“Expansion of existing industry is the largest creator of jobs in our city, state and nation. Paul Harvel, our President, first met with Taber about this project in the fall of 2018. This began the process of our support of Taber in their efforts to win this expansion for Russellville.” Said Russellville Regional Alliance for Economic Development Chairman Mike Duncan.

Congressman Steve Womack described how he sees Taber’s role from a national perspective, “The expansion of an existing company such as Taber Extrusions means a lot more than the location of a new company. It means that Taber is in the right place and has what it needs to succeed. Taber plays an important role in the defense of our nation with products that are an asset to our defense capabilities.” It is important to note that Taber historically provides for many industries, including aerospace, shipbuilding, infrastructure, automotive, as well as military and defense.

Taber is already known for their wide range of capabilities, both broad and unique, and Mayor of Russellville Richard Harris thanked Taber for choosing Russellville as their location, “The fact that you chose to expand and add new technology here is the highest compliment you can give the city and citizens where you live and work. Economic development and job creation is one of our top priorities. We congratulate Taber on this advancement.”

Taber is a minority business enterprise which is AS9100, NADCAP, and ABS certified. Founded in 1973, Taber Extrusions originally pioneered a process for extruding rectangular billet which enables the company to extrude solid profiles up to 31 inches wide or hollows up to 29 inches. Taber expanded with the purchase of an extrusion facility in Gulfport, MS., in 1995 which houses a cast house and two additional presses, and multiple expansions of value-added fabrication services. Taber continues to extrude billet in a wide range of alloys and sizes, including 7”billet molds, and has diversified its markets beyond military since its inception to include aerospace, automotive, marine, infrastructure, and sporting goods, among many others. For these markets, the company supplies extruded products in a variety of soft and hard alloys. In 2018, Taber added ultra-precision extrusions to their capabilities allowing them to further serve customers in electronics, computer, and medical industries. Today Taber is proud to announce yet another exciting launch into Friction Stir Welding.